From game changer to life saver 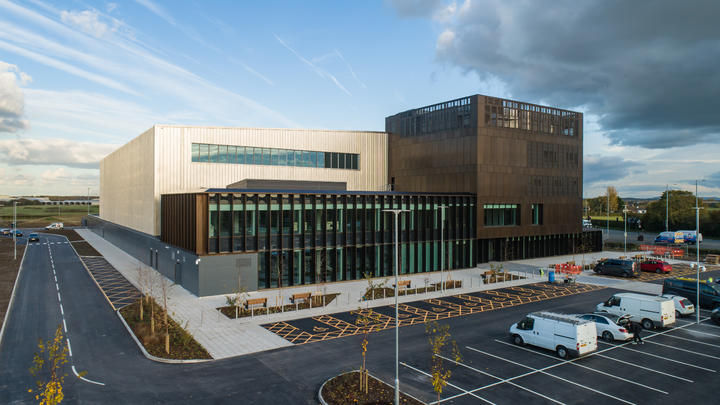 Six months after being hailed a ‘game changer’ for the North Wales economy, the University of Sheffield Advanced Manufacturing Research Centre (AMRC) Cymru is playing an essential role in an unfamiliar game, helping save lives as a production facility for thousands of vital medical ventilators.

“To be just a small part of this national effort will undoubtedly be the biggest highlight of my entire career and I’m extremely proud to be leading our amazing AMRC Cymru team through it,” said Andy Silcox, Research Director at AMRC Cymru.

“However, it has definitely been sad at times knowing the team has worked so hard over the last 12 months to get the building up and running; to see it completely stripped out before we’ve done any real research was tough.”

Turning AMRC Cymru, which officially opened in November 2019, into a production facility for ventilators was suggested on the very day Boris Johnson first called on manufacturers to join a wartime-style effort to mass-produce the equipment following the outbreak of Covid-19.

“The idea of using AMRC Cymru was first put forward on Monday, March 16, but for the next week and a half there was a lot of confusion around what was being asked of us while the Ventilator Challenge UK consortium zeroed in on which design they would progress,” said Andy. The industrial consortium came together after the Prime Minister made a plea for thousands of ventilators to be delivered to the NHS within a matter of weeks. Under the leadership of the High Value Manufacturing (HVM) Catapult, of which the AMRC and the Nuclear AMRC are a part, the consortium is focusing production on two existing ventilator designs which meet the high-level specification, one made by Penlon and the other by Smiths Medical.

Andy said AMRC Cymru’s role in the ventilator project became real on Wednesday, March 26: “That was the day we were chosen to be involved in the manufacture of the Penlon device. We are the venue for the manufacture of two key sub-assemblies: the absorber and the flow meter units.”

Where once a single security guard supervised a handful of people entering the open access research facility, now a large security team in white tents screen the 350 shop floor workers using the building. A two-stage security process means each engineer must thoroughly sanitize their hands in the tents outside and then have their temperature taken by a thermal imaging camera. Anyone with a temperature above the average of 37.5˚C is not allowed in.

Now authorised by the Medicines and Healthcare products Regulatory Agency (MHRA) for use in hospitals, following extensive testing, the Government has confirmed an order for 15,000 Penlon devices. Hundreds of units were built in the first few days, with production now being further scaled up.

Situated in the Deeside Enterprise Zone and backed by £20m from Welsh Government, AMRC Cymru will focus on advanced manufacturing sectors including aerospace, automotive, nuclear and food. The facility operates a 2,000 square metre open access research area with Airbus the first major tenant with a platform to develop their next generation wing technologies aligned to its ‘Wing of Tomorrow’ programme.

“Airbus, who are also part of the Ventilator Challenge UK consortium, are the driving force behind this,” said Andy. “We have integrated into their mobilisation team and are providing as much support as possible to ensure that our building is fit for purpose as a safe production facility.

“There are eight assembly lines for each sub-assembly, requiring 88 operators per shift. There are two shifts a day, with everyone working in a four days on, four days off pattern. That means 352 shop floor staff; add in the office, logistics, security and cleaning staff and it takes the full complement to around 500.”

Andy said the logistical problems alone would have been challenging enough, but became extremely complicated while adhering to strict health and safety guidelines: “Not only did we have to strip out an R&D facility to install 16 new productions lines from scratch in less than a fortnight, we also needed to create an environment where 88 operators could work simultaneously while maintaining safe social distancing.

“We’ve made real use of our modelling and simulation capability. Our engineer Xuan Sheng Tie created a model in Process Simulate to safely control operator movements around the facility to allow us to organise shift breaks and lunch times to suit what we have on the shop floor.” Andy and AMRC Cymru’s Workshop Manager, Matt Booth, have been working 12-hour shifts, in line with Airbus’ four days on, four days off pattern since Saturday, March 28 and are the only AMRC staff allowed on site.

But Andy said it has been an incredible team effort from staff across the AMRC: “We limited it to myself and Matt to minimise the infection risk across both the AMRC and Airbus but we have unbelievable support.

“Chris Garlick at the University of Sheffield’s estates team has arranged 24/7 cleaning, security and maintence cover for the building throughout the production period, which we anticipate to last up to four months. Then there are all the other members of our team in particular Xuan, Bobby Manesh, Michelle Hibbert and Harri Williams who have been supporting Matt and myself.

“To see the way everyone has pulled together to get this done has been massively uplifting. It has also been an affirmation for me of just how brilliant the UK manufacturing sector is and it gives me a lot of faith that the overall AMRC mission is worthwhile and that we will be part of an incredible bounce back by the sector once this crisis is over.”

Global advanced manufacturing conference to chart prospects for significant change in aerospace
30/07/2015
The impact of new materials, technologies and changes in the supply chain wil …
Machine learning making light work of AM aerospace alloys
15/01/2021
Machine learning technology will be used to make the additive manufacturing (AM) proc …
UK joins hands with Canada to do the Salsa
19/11/2019
The AMRC has joined forces with a UK tech start-up and a global engineering giant in …
'Enormous opportunity' for Airbus to go green
11/12/2019
The head of Airbus’ Broughton plant in North Wales has said becoming the first …